I think many people have been longing for the Berlin Food Week 2019 and now it’s already over. Today, I invite you to take a look back on this food festival and I’ll tell you some of my highlights. Here we go!

Every year, the Berlin Food Week has a special motto. For 2019 “The Great Tasty” was proclaimed and thus a reminiscence of the Golden Twenties. The motto was taken up especially at the participating restaurants of the so called Stadtmenue (city menu).

I think the Stadtmenue (city menu) is basically a brilliant thing. Once again this year around 60 restaurants in Berlin have participated. All of them have put together a multi-course meal under the motto “The Great Tasty”. The focus this time was on champagne and lobster and the golden twenties.

As you can guess, vegans had a difficult time to find something suitable. Most restaurants have, in one way or another, incorporated champagne and lobster into their menus. Surf and Turf is a classic that fits well here, for example. Only very few restaurants have offered vegetarian or vegan alternatives for each course. 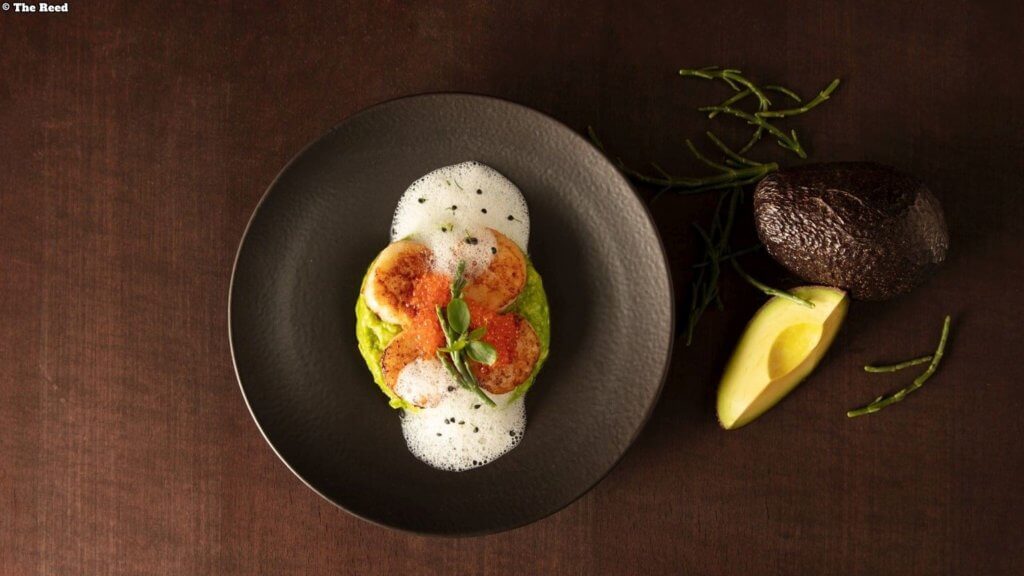 I want to highlight The Reed here. The kitchen crew has managed to put together a great menu with vegan alternatives for only 29 euros. For starters there was either scallop, avocado, dill, tomato and wild salmon caviar or baby artichoke, avocado, dill, tomato and basil caviar. The main course was either classic surf & turf consisting of beef tenderloin, prawns, truffle, parsley root and pear or boletus & asparagus, chicory, truffle, pear and parsley root. The dessert then was vegetarian, namely creme brulee, cassis, coffee, berries.

While the Stadtmenue (city menu) was available for the entire duration of the Berlin Food Week, the House Of Food took place on Friday and Saturday only. As in the previous year, the Bikini Berlin was chosen as the venue which is located near Zoologischer Garten station. On both days there were Foodies mixing with visitors of the Concept Shopping Mall. 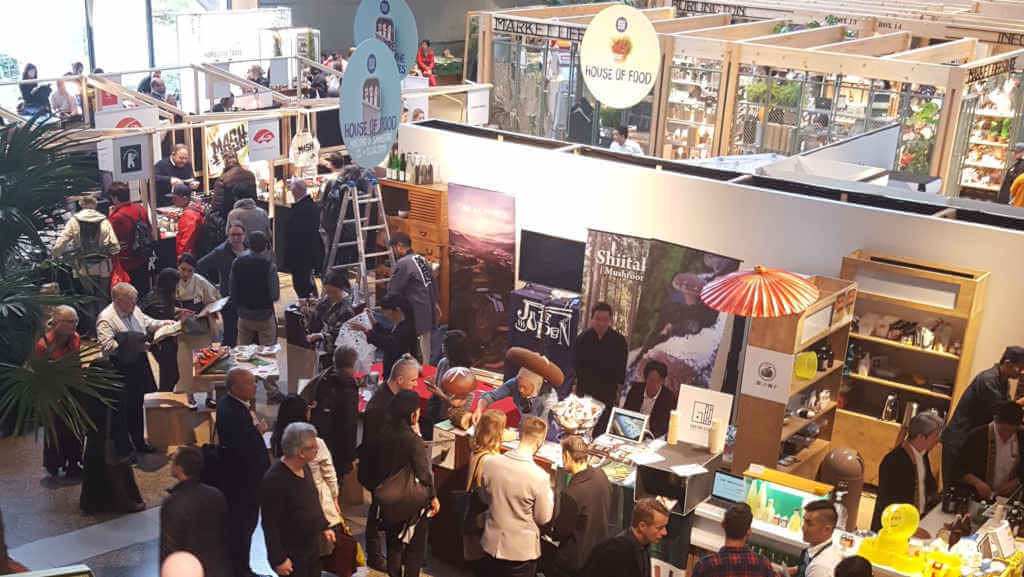 For me, this is always one of the highlights of the week. Again numerous food startups presented themselves to the public. It is extremely exciting to see which ideas have come to fruition. I’ll go into a few vendors that I really liked in a few seconds. You can find the entire list of exhibitors here.

But before that, let’s talk about an event in the event, so to speak.

Presentation of the Tagesspiegel Genuss Guide 2020 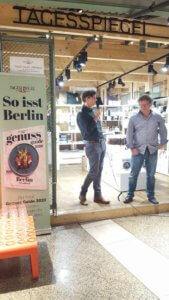 Der Tagesspiegel used the Berlin Food Week 2019 to present its Genuss (indulgence) Guide 2020 on late Friday afternoon at the Tagesspiegel Pop-up Store. Gastro-Editor Kai Röger and wine expert Ulrich Amling presented next to the current Gastro Guide also a 1989 Riesling late vintage from the Dienheimer Kreuz. This exclusive wine is being offered in a limited edition at the Tagesspiegel shop on the occasion of the 30th anniversary of the fall of the Berlin Wall. And of course we were allowed to taste it that evening. Very nuanced and a long finish, something you do not get to drink every day.

As a native of Austria Kasnudl of course immediately pulled me under its spell. I know the classic Carinthian Kasnudl from my time in Klagenfurt. It is filled with a mixture of potato, cottage cheese (Topfen) and mint or in a sweet version with Kletzen (dried pears). 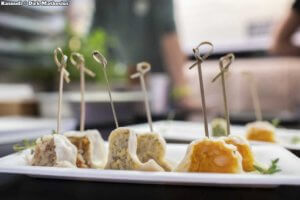 At Kasnudl there are many other varieties besides the classics and you even have the choice between wheat, spelled or wholegrain dough. This results in an enormous number of possible combinations. There are savory and sweet varieties, lactose-free, vegetarian, organic and even vegan ones.

The Kasnudln are handmade in Carinthia when ordered and are currently available in Austria and Germany. 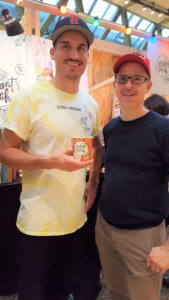 I was totally surprised how good it tastes and the quality of the ingredients. For a moment, the concept reminded me of Asian instant products and Quicklunch, an artificial instant soup that existed in my youth. Maybe one or the other still remembers it.

Instant fresh, however, is quite different. The ingredients are all natural and organic. All products are vegan, gluten free and without preservatives. You have the choice between couscous and rice as a base combined with other ingredients such as turmeric, seaweed and chili. Currently there are the varieties Soul Meal, Brain Meal, Mind Meal and Heart Meal available.

By the way, the founder of instant fresh, Fabian Zbinden, was already on TV at the German equivalent to “The Shark Tank”. More details can be found on the homepage of instant fresh.

For all foodies who like to lend a hand, the Miele Cooking School is just the right thing. It is an integral part of the Berlin Food Week and thrills many people every year with its interesting cooking workshops.

The breadth of the workshops, which took place on Saturday and Sunday, is large and ranges from baking to pasta. There were some courses that were interesting for vegans, by the way. These included the workshop “The versatility of algae” and “Enjoy vegan with jackfruit”. I have chosen the latter and will of course tell you more about it in the following paragraphs. 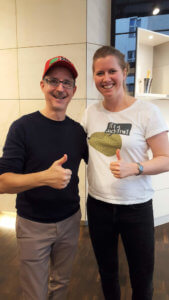 The host of the workshop was Julia Huthmann, the founder of Jacky F. She lived in Sri Lanka for a long time and came up with the idea to bring the giant fruit to Europe. A jackfruit can sometimes reach an incredible 40 to 50 kilograms. 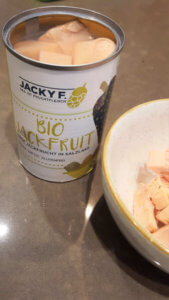 Jackfruit can be used as a meat substitute for vegan cuisine. The young fruit has a firm consistency and a fiber structure reminiscent of chicken meat. The taste is of course completely different and reminded me more on an artichoke. Incidentally, Jacky F. has the organic jackfruits processed directly in Sri Lanka, which keeps the value added as far as possible in the country of origin. The pieces are put in brine, are canned and shipped to Europe and can now be found in many organic markets or can be ordered online.

In the workshop we made a jackfruit goulash and a jackfruit wrap. Both were delicious by the way. Jackfruit can be easily integrated into a variety of dishes. In the goulash you could leave the pieces as they come out of the can. For the wrap, we pulled the jackfruit, seasoned it and fried it in a pan.

What else did they have at the Berlin Food Week 2019?

You don’t know where this place is? It is the forecourt of Mercedes Benz Arena opposite the East Side Gallery. An entertainment center has developed here, which was integrated into the Berlin Food Week in 2019 for the first time. At the UCI Luxe – a cinema – the whole week “films that whet the appetite” were shown. The movie ticket included special offers at L’Osteria, the Amar and the 260-degree bar.

Also the first time at the Berlin Food Week, was Hugenbubel and its bookshop of the future in Europa-Center. Four selected food start-ups were allowed to present their products in the bookshop’s show kitchen. Of course with subsequent tasting and Q & A session. Included were Nordic Oceanfruit, Gourmetspirits BLN, Mash and Kofu.

The city is eating itself up (Die Stadt isst sich auf)

At this event, which took place on Wednesday, the question was asked as to whether a city like Berlin can feed itself. More specifically, an attempt has been made to cook exclusively with food that comes from Berlin. The event could be attended by 60 guests, who incidentally, together with the initiators Renate Künast from the Greens and Eva-Maria Hilker editor of the newspaper EssPress, were able to put the sample to the test.

The Berlin Food Week was again a huge event and I would like to thank the entire team for the organization. As an outsider, it’s hard to imagine what it all takes to get such an event going.

My favorites this time were definitely the House of Food and the Miele Cooking School. If I can give the organizers a tip on the way, then I would wish to have more vegan options within the Stadtmenue (city menu) the next time. That should easily be possible in the vegan capital, right? In any case, the trend towards a plant-based diet was strongly reflected by the exhibitors in the House of Food.

YOU WANT TO BE INFORMED ABOUT NEW BLOG POSTS AND CURRENT FOOD EVENTS? SIGN UP FOR THE NEWSLETTER!

Posted by
Arnold Kienreich
We use cookies. If you continue using this website, we asume you consent to the use of cookies.OKNoContinue